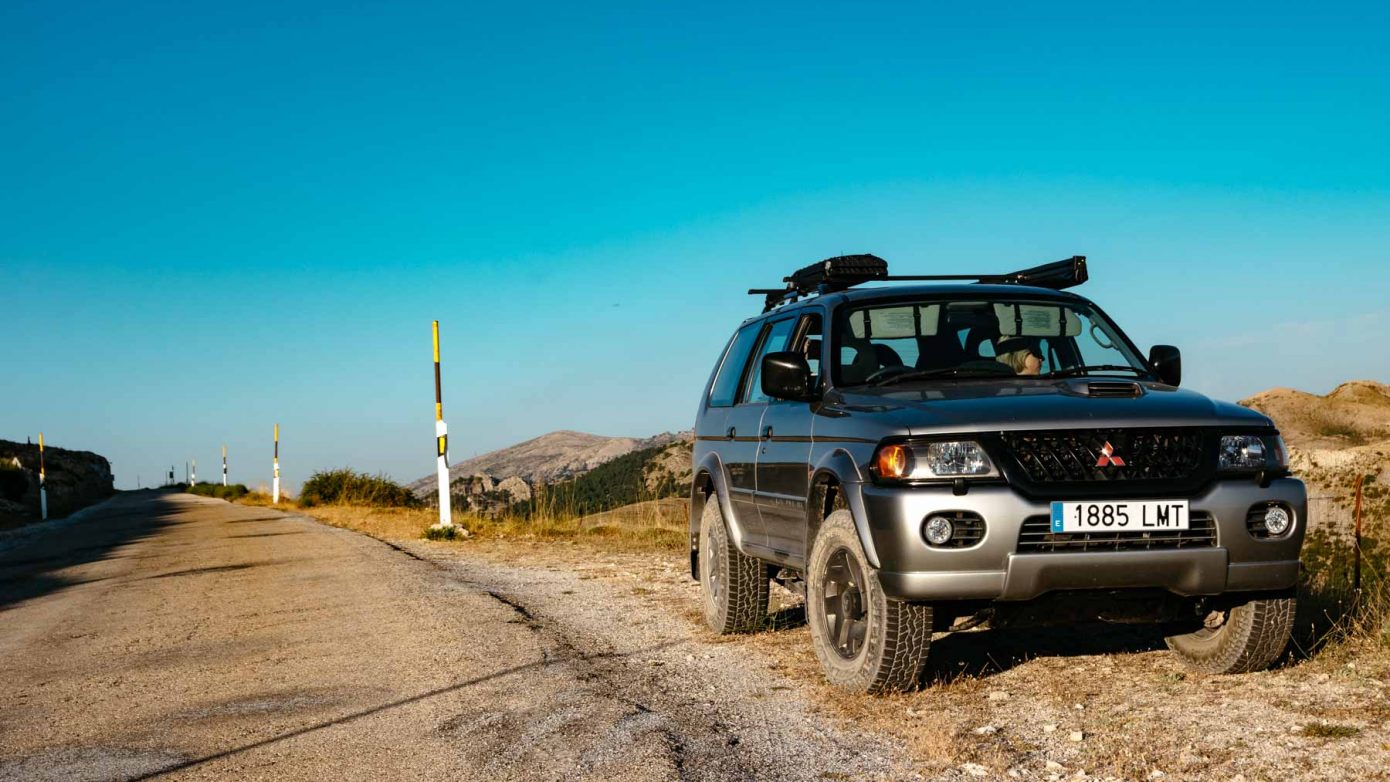 20 year old Mitsubishi Shogun Sport ownership review after twelve months running this old 4×4 we talk about the pro’s, the con’s, what we like and don’t like and whether or not this old beast makes a good overlanding vehicle.

Like it or not time goes by by very quickly indeed, it has been 20 years since this 4×4 rolled off the production line and was brand new – not that long ago. I’d always liked the aggressive look of the sport model, they were one of the vehicles that stood out to me when I was in my 20’s after first seeing a Challenger as they were badged back then in the UK.

Fast forward 20 years and we have one, making all things overlanding in Spain possible, we bought the Sport blind from the UK and imported it to Spain, we also hit lucky as was a good example too so is it everything we thought it would be?

There is no getting away from the fact that the Mitsubishi Shogun Sport [1st gen] is an acquired taste, based off the L200 pickup the drive is very agricultural, the driving position is high and seat adjustment is limited if you’re a big guy like me, your head almost touches the roof lining even with the front seat positioned as low as they go.

You can’t obviously compare the driving experience of any older 4×4 to that of a car but the Sport is unique, it’s basic, designed to get the job done. The turning circle is like navigating the Titanic but like all things, once you get used to it, it’s fine.

Read any Shogun Sport ownership review and you usually hear that the 2.5d model is underpowered, the 2.8 is the better bet but unfortunately they were not made for the UK market at the time, the petrol [all autos] models are the real beast but you’ll take a hit on fuel economy.

It might just be me but when you read car reviews it’s like everyone wants the perfect vehicle, does such a thing exist? Our Shogun has been chipped taking it up to 130bhp which does make a difference but is power that important when overlanding? Perhaps power is the wrong word here as the Sport does have more than enough, the important thing to remember is how that power is distributed.

If there is ever a vehicle that could have done with an extra gear its the Shogun Sport – for road/motorway driving anyway, off road the Sport is an absolute animal, it eats up dirt tracks, takes inclines with ease and just keeps going wherever you take it. Offroad performance was impressive when we first acquired the vehicle with road tyres, then when we had the all terrains fitted it was noticeably improved.

Space [or lack of it]

At first the Shogun Sport looks like a decent sized beast, it’s trimmed down and streamlined compared to it’s bigger brother ‘the proper Shogun’ as it’s sometimes described but it still casts a big shadow. On the interior side of things the Sport is not as roomy as you might think, three in the back will be cosy and you certainly can’t share the armrest in the front. It’s far from cramped but for a mid-range to large 4×4 you might expect a bit more.

How much room do you need though? An overlanding rig is set up to the individuals requirements and only you know how much gear you’ll be carrying and therefore the space required for any given configuration.

The Sport provides us with enough room. We have our kitchen set up custom built in the back with large drawers and enough space on top to carry all the gear we need. We also need the back seats to remain useable as we overland as a family of three.

The tank on the Shogun Sport is 74 litres and sees us for around 360 miles, the fuel economy is not great but it’s not horrific either. In our first year of ownership we’ve encountered very little that has gone wrong, in fact most of the money spent has been on mods that we wanted for overlanding such as all terrain tyres, rear springs and a few bushes. The Shogun also had all the belts changed as soon as we got it [better safe than sorry] and this came in at €400 euros which also included a new water pump [seeing as the mechanic was in there]

Replacement parts are available from specialist parts dealers, Merino 4×4 Spain are one we’ve used and there are several in the UK, availability is pretty good as are prices. The reliability of the Shogun has been impressive, it starts on the nail every time without fail and has never let us down yet.

The simplicity of the vehicle is something we like, it’s a blank canvas inside giving you the opportunity to get creative and make storage solutions using molle etc, there are no bells and whistles which means that there is less to go wrong, it’s not full of electronics, it’s old school basic stuff and same applies to a certain extent to the engine.

Having an overland vehicle that can potentially be fixed on the roadside is a big benefit, lift the bonnet on these old 4×4’s and you can actually see the engine and ancillaries, more to the point you can actually get your hand in there to access them too.

A Vehicle for Overlanding?

Of course. The Shogun is more than capable of carrying any weight you add to it, there are several options for roof rack mounting and if you need to tow, the capacity is 2800kg [although it will pull more]

The rear door opens upwards, your typical hatchback style and this has it’s pro’s and cons. One downside is that the spare wheel is slung under the chassis so spare wheel accessories are out, you’ll also struggle to find a 270 awning as the boot sits too high when opened. If none of this bothers you then you can take advantage of a more open space around the rear of the vehicle plus some shade and rain cover which is something you don’t get with a side opening door.

The 16″ rims on the pre 2005 models are the right size, later models had 18″‘s which means a lower profile tyre – not ideal for offroad as there is less cushioning making a harsher ride. There is a lot to be said for stock rims as they have undergone strict testing etc in fact they are among the best quality rims you can get so if you’re not planning in investing in upgraded alloys or steels the standard rim is a great size for overlanding [sets are also readily available second hand if you want to ‘downgrade’]

As a mid range sized 4×4 the Mitsubishi Shogun Sport K90 will meet the needs of most overlanders, it is a 4×4 with a strong drive train, reliability and decent performance. The rear can be customized with kitchen storage and while it may not be the most cavernous 4×4 if you like keeping simple the space you do have will more than suffice.

To conclude this Shogun Sport ownership review we have to say that despite the negatives we love this old 4×4, crossing over the late 90’s to the early 2000’s this vehicle is almost retro but still modern in appearance. Yes the ride takes some getting used to but I have the impression that if we were ever to sell the Shogun we’d be having a conversation about missing it.

It’s a unique proposition, there are newer 4×4’s out there of course but considering the Shogun’s capability off road you’ll be struggling to find anything that comes close for a couple of grand. Would we buy another? Yes, they may be an acquired taste but like everything else there are pro’s and con’s. There will be people that hate them and people that swear by them, kind of like Marmite there is no middle ground with the 1st gen Shogun Sport.

Overall we love it, after one year we are satisfied that we took one of the better options available for our budget at the time. No regrets.