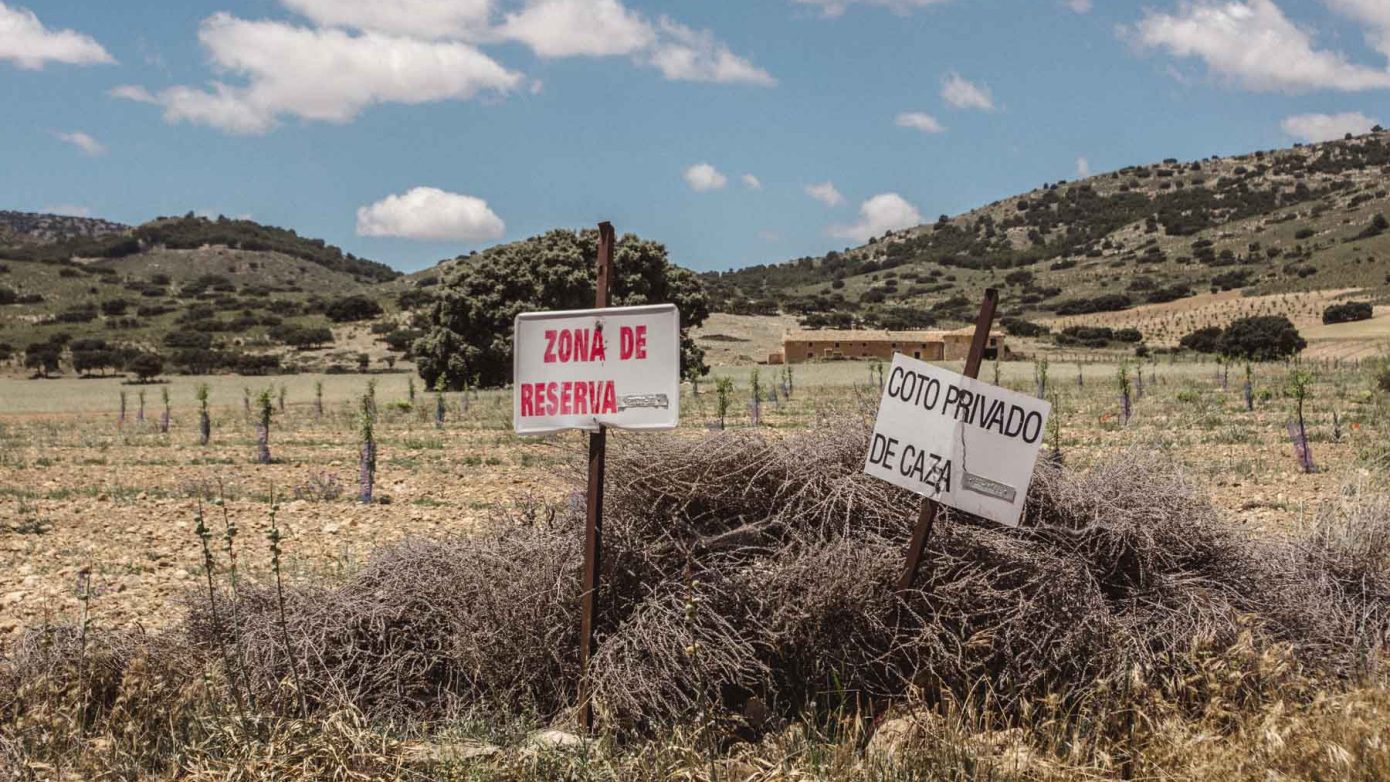 Common trail signs in Spain and what they mean – overlanding in Spain will see you negotiating the campo [countryside] and the wooded hills / ‘Sierras’, there are many signs, some of which are quite confusing while many are self explanatory. Unless you’ve lived in Spain for a significant length of time many of these signs will have little meaning so let’s clear that up as it pays to be on the lookout for certain areas especially when it comes to hunting.

During our time in Andalucia since 2004 we’ve seen quite a few signs out in the campo and have wondered ‘what on earth does that mean?’. Since we started overlanding we’ve seen even more, some are even home made by landowners depicting apocalypse gas masks, radioactive illustrations and animals of some description. On this page we’ll be looking at the more legit signage:

The black and white sign is without doubt the most frequent you will see in the Spanish countryside and wooded areas, the sign denotes private hunting meaning that the land owner has the right to hunt on his own private land.

Reserved for hunting sports, the black and white sign above can also mean the same thing. Signs like these are in areas where hunting is allowed in season.

Having the same meaning as the black and white sign above except this time spelled out. Many of these signs are old and some illegible, you can also see them knocked over or rusted through.

Another type of fire hazard sign this time warning against open fires and barbeques. You have to wonder how seriously people take these warnings, it could be argued that there are too many rules and regulations surrounding the countryside in Spain including wild camping, most of these rules are to do with fire hazard and litter – both of which are evident anyway.

I took this image when we decided to park up for a coffee break in a recreation area, clearly this fire had been there a while and lit with a blatant disregard for the law. Five yards from the sign and Twenty yards from the main road.

Another variation of a fire warning sign and an old one at that, as the signage suggests there is a fire risk, ‘no tire colillas’ means don’t throw your cigarette butts out the window. It is worth noting that there are different variations of these old fire warning signs, some having different messages,

If you are overlanding in rural Spain you will see plenty of these natural park signs, some are in the middle of nowhere while others indicate the border of the park as well as entry and exit points.

This one was knocked up for a cycle trail that is held annually, you can tell because it has a typo… Essentially it indicates a dangerous track down. On a normal day there is no signage for motorized traffic – this stretch of dirt road has five switchbacks, again, not all trails that should have a sign do so.

If you’ve found some water or stretch of river then you will likely come across a sign similar to this – it means you can fish but you can’t kill the fish, they must be put back although from what we saw not everyone abides by the rules.

The ‘Zona de Reserva’ sign also has a smaller version, the same as the black and white hunting signs with the exception that it all red. The sign means no hunting beyond this point. The smaller red version also denotes a ‘zone of security’ meaning that no guns can be fired due to dangers to the public and public property.

A 10t limit and dangerous bends, this one was shot in the province of Jaen on a trial that took us down to the village of La Toba, the bends snaked down the mountains but were wide enough for two way traffic, some tracks however will be single lane only and there won’t always be a sign like this to warn you of switchbacks.

Abejas – ‘Bees’, there are a surprising amount of beehives in rural Spain, all of the hives we’ve come across have been deep in the woods down narrow tracks and tend to occupy a cleared area of woodland which you don’t know is there until you are upon it. Caution required for obvious reasons…

Another easy one to understand but why is it here? Photographed on a short trail near a reservoir with no building or construction work in sight [anywhere] we can only assume that this sign has been leftover after the work finished. It’s worth bearing in mind that not all signs indicate the reality of what may or may not be happening, this is Spain!

Not too many of these around but an indicator of altitude once you reach the highest point of a trail.

This one needs to be observed – the red circle on white is a prohibition sign and is usually accompanied by a message under it, in this case the sign is by the Junta de Andalucia but they can be like a standard road sign too. The message here is no vehicles [from what we can understand] but certain types are allowed. We tried it and just got managed to turn around as the trail was like a rollercoaster.

A la pista – to the track, generally denotes a hiking trail although there are many different signs for this, some of which are made from wood or coloured ceramic. Something you are likely to see if scouting around on foot.

This one is interesting, if your Spanish isn’t up to scratch then this one means that the road is liable to flooding. We had to look this one up too as we didn’t know what it meant. It pays to keep a weather eye out if you’re passing one of these on the trail.

Speaks for itself this one, usually accompanied by a chain hanging between two posts, becoming more and more common in the Spanish countryside.

This one means that the road or track is a dead end, this sign is actually a bit of a rarity [at least on our travels] as most dead ends are never sign posted, you simply run out of track…

Private land/private farm, get caught past this one and you may end up with a disgruntled Spanish farmer waiving a stick at you, the land is private and has been marked as such for a reason. Not too many of these signs about but they are there and worth taking notice of. If you have dogs don’t let them off the lead around these areas.

A hunting sign clearly spelling out danger. These signs pop up without warning in rural areas when the hunting season begins, the Autumn/winter season runs from October through until the first week in February. It is best to avoid the area if come across signs like this as they will be shooting, you will probably see 4×4’s parked up with dog trailers and people in the hills wearing hi-viz jackets.

Clearly hunting but the positioning on the side of a public road makes things confusing, plus we have a hand written date [you can just make it out in the photo in blue pen at the bottom] which says 19-enero-2022.

The date means hunting on that specific day, this sign is different in the fact that it is saying ‘don’t pass’.

Another variation on a hunting sign for wild boar, hand made but pretty clear. These signs were all over Baza natural park on our last visit just after hunting season had started up again in October.

No specific instructions on this one, just stating danger in the area.

Mushroom picking instructions… in some places it is forbidden to take anything and that includes plants etc. Mushrooms are no exception so here we have a sign that tells us how to do it properly where it is allowed.

Okay, so this photo wasn’t taken on the trail but you can find them out and about, Camping is prohibited… there is debate whether or not signs of this nature are actually legal as it depicts a camper van which could be seen as victimisation – why is there no car on there either?

Okay, so this list is only a small percentage of common trail signs in Spain, it’s also worth noting that all the images on this page were shot in Andalucia so some may differ from region to region.

The main ones to take note of are the hunting signs and any prohibition signs with the text below. Most signs are warnings or detail what is prohibited but they all mean something and in the main, are there for a reason. We’ll be adding more to this post as and when we stumble across something new or unusual.