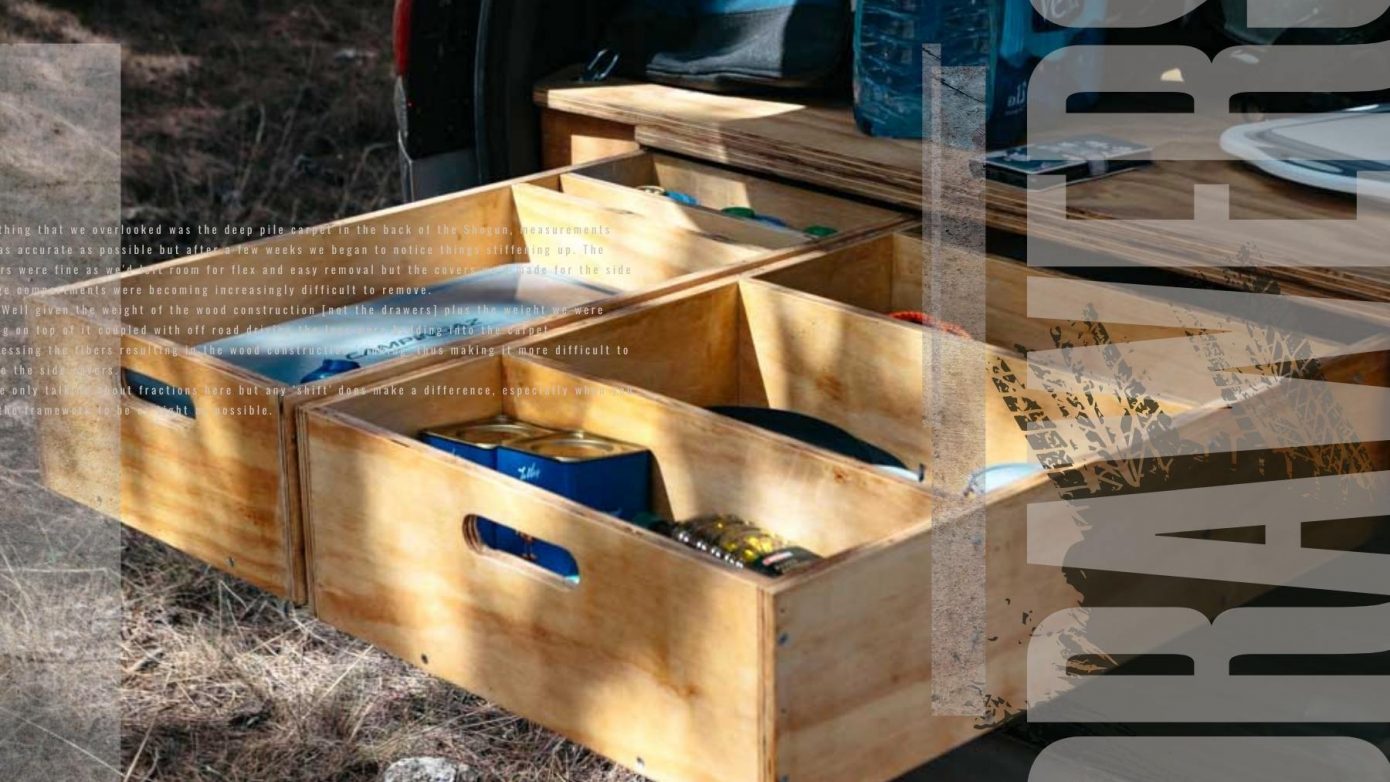 DIY overland drawers and how they are holding up after six months of weekly use.

The storage system was one of the first jobs we did on the Shogun, essential for keeping all the gear organised and a handy set up for cooking.

The build was fairly simple using plywood, angle iron and a few other bits and when we’d finished the whole thing worked like a treat. So where are we at six months down the line? Is there anything we’d change and what are the pro’s and cons of a DIY drawers system for a 4×4?

One thing that we overlooked was the deep pile carpet in the back of the Shogun, measurements were as accurate as possible but after a few weeks we began to notice things stiffening up. The drawers were fine as we’d left room for flex and easy removal but the covers we’d made for the side storage compartments were becoming increasingly difficult to remove.

We are only talking about fractions here but any ‘shift’ does make a difference, especially when you want the framework to be as tight as possible.

Cooking on the pull out table threw up an unexpected issue, using the twin burner stove, especially cooking the likes of bacon or sausages resulted in oil splashes on the plywood, the easy fix was to use a table cloth but the oil still finds its way onto main top of the build inside the vehicle.

Being plywood this can easily be sanded out however we are thinking about an alternative surface or treatment that can be wiped down. Some people glue carpet to the top of their storage build but we are glad we didn’t not just due to oil splashes from cooking but also dust as this always finds its way inside the Shogun when driving through the campo.

One modification we did make once the drawers themselves had been tried and tested was to file down and sand the back bottom edge of each draw, making this edge curved and smoother meant pushing the draws back in was easier as one was beginning to get caught on the metal cargo latch which is bolted to the floor of the Shogun behind the back seats.

Having the raised storage option in the floor of the Shogun means the drawers pull out and push in with little effort as they simply slide in and out on the carpet.

One thing that we may have done differently is to construct the frame a couple of inches higher, the storage compartments in the luggage area of the Shogun, while very handy do have a trade off in this instance and that is that they raise the frame for the drawers.

For us having deeper drawers and a higher pull out table was a no go as the table would have been too high, the only alternative would have been to remove the storage compartments from the boot floor but they are too handy for stowing away tools [see video]

The very nature of plywood means that it is strong which is why we opted for it, it does however have a downside and that is it splinters along the edges, this has happened to us a couple of times when removing the drawers fully and placing on the ground, just something to be aware of.

The main top is also beginning to suffer slightly from scratches with bags, boxes, water containers and coolers being pulled out and pushed back in every weekend, the thing to remember though is that is was built with simplicity and functionality in mind, it’s not an overland show car and woodwork will get marked in an area of the vehicle that is used the most.

It works, it’s a straight forward design that can be removed if needs be and it allows us to organise pretty much all of our kitchen gear out of sight in a secure way.

Being plywood, it is getting marked and stained but this can be rectified with a little sand paper every now and then and a fresh coat of varnish/wood treatment. Would we do anything differently? Probably not, these DIY overland drawers serve their purpose well and it’s hard to see where they could be improved unless we start talking about draw runners and other fancy bits that make your drawers a hundred feet long!

Its a simple build and one that can be adapted to any vehicle so whether you’re overlanding a Mitsubishi, Toyota, Subaru or anything else the design principle remains very much the same, only the dimensions will vary.

Did you build your own DIY overland drawers system? What would you improve/do differently and why?

Drawers in reverse? See how we converted the Shogun into a camper >>>