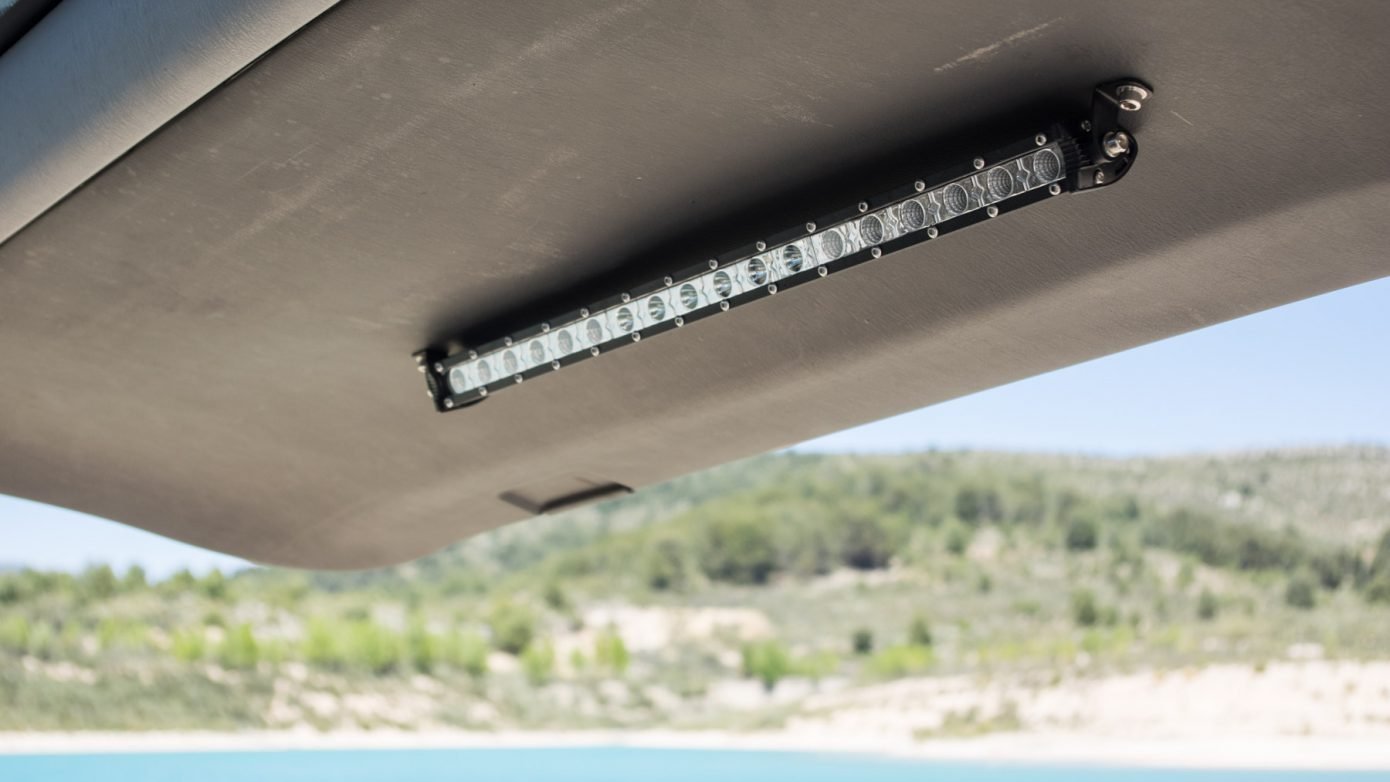 Fitting LED Bar to Shogun Tailgate. Having swapped out the original interior courtesy light bulbs [which makes a big difference] it was time to consider lighting at the rear of the truck for when we needed something more powerful at night whilst out overlanding.

The plan was to fit the ‘drawerless’ storage system as soon as possible but getting things in the right order to avoid future headaches is important, while an interior LED bar on the Shogun tailgate was not a pressing job it moved up to the top of the jobs list given the fact that panels had to be removed to access the electrics which meant it had to be done before the storage unit went in otherwise we’d have to remove it all to fit the light later.

LED bars range from about €15,00 upwards and we settled on a budget model for €30,00, no fancy gimmicks, remote controls or colours, just a straight forward LED light for the interior of the vehicle. The fact that the light was weather resistant was a bonus.

Fitting the actual bar is the easy part, running the power cables is a different story altogether, to get the job right we wanted fully hidden cables which meant running the 12v live behind the panels, under the headlining, through the rubber tube which connects to the tailgate and down to the bottom of the tailgate itself.

Tip: to do this you will need a draw-wire

It’s a good idea to measure up the inside of the tailgate before buying your light and by this we mean removing the plastic interior cover to get right in there as there are only a certain amount of holes in the tailgate frame that are suitable for the bolts you’ll need to mount the light.

Remove the plastic panel from the inside of the tailgate, this is done by gently prizing away the plastic from the frame, there is also one screw to undo inside the lift handle and two odd fixings [one each side] which need to be pressed to be released.

Get your measurements sorted and use the provided mounting kit that comes with the light or simply bolt on, we used additional, larger washers to for more a larger surface purchase on the plastic.

Running the earth wire is very simple – there is an earth connection on the inside of the tailgate that comes from the heated rear window.

Running the live is not so easy! Starting in the interior of the car [assuming you are tapping into the existing 12v cigar lighter in the boot] remove the right hand panel that runs the extendable load cover – this is simply three screws. Carefully prize away the top plastic panel above the cigar lighter and the panel that the lighter is on, jam something behind it under the window so you can access  behind it.

Undo the clips on the headliner and pull away the rubber strip.

Next remove both ends of the rubber grommet which runs the wires from the body to the tailgate [don’t worry, these are easy to put back in]

Next run the top end of your live along the headlining and down behind the plastic panels towards the 12v cigar lighter ready to connect up.

Squeeze both ends of the rubber grommet back into place.

Connect live cable to LED bar and refit your panel on the tailgate.

Get the right size light, measuring up is crucial as there are only certain spaces your light fixings will go in the tailgate frame.

Run the wires from the light between of the plastic and sound proofing to avoid it getting caught up in the wiper mechanism.

Use a draw wire to feed your live cable otherwise the job will be nigh-on impossible!