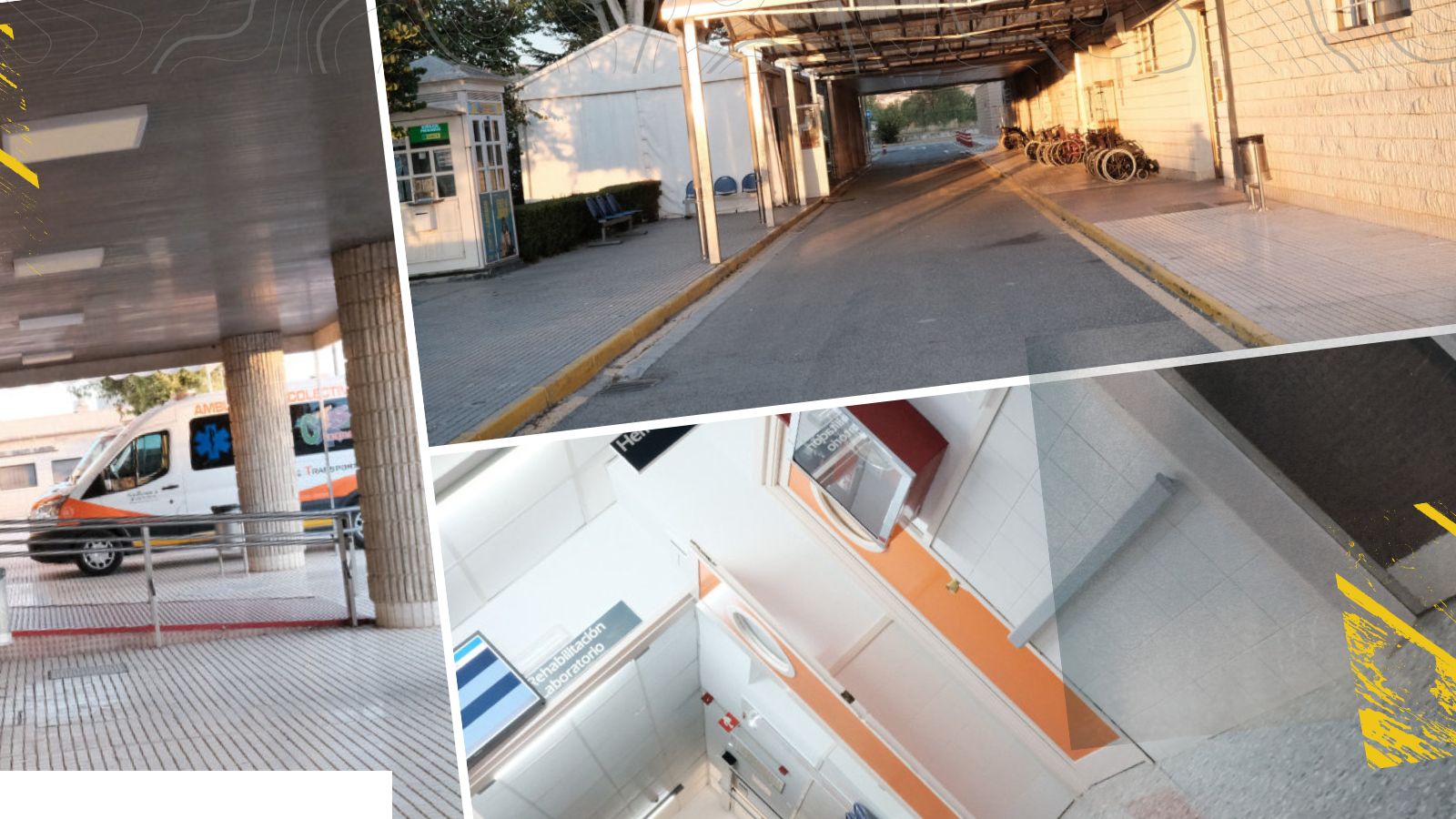 Is the Spanish health service good in rural Spain? I explain what my exact experience has been after returning home from hospital.

The Spanish health service may be ranked as one of the best but unfortunately this has not been my experience. In 2022 I suffered a stroke and spent eleven days in Granada hospital before returning home. The weeks and months that followed revealed just how bad the Spanish health service can become the more rural and away from the big cities you are. This is something that I had not thought about until it was mentioned to us by a Spanish friend.

Disclaimer: what follows is simply my own personal experience as it happened, your experience of the health service in rural Spain may by completely different.

Nobody wants to be in hospital but in general and besides from one incident, my experience in Granada hospital was positive. You cannot fault the thoroughness and the barrage of checks that were performed were comprehensive to say the least.

There are cultural differences to expect if you find yourself in a Spanish hospital, one of which is the hours they keep, it’s very noisy too which does not help, in fact before I Ieft they had me on sleeping pills just so I could get some shut eye. Read the full post on my experience in Granada

When did problems start to arise?

Problems began immediately. Having returned home from Granada still very much unsteady we had to see my local doctor so that he was aware of what had happened and to make three appointments in the nearest hospital to us which is ‘Baza’ [45km away].

Off we went back down the local surgery and saw another doctor who was standing in for the usual guy. He made all three appointments in under 10 minutes there and then with no issues. Job done, or so we thought.

July comes around and the only appointment received out of the three that were made was for hematology. There was however something more pressing in the form of a gum infection which saw me needing a deep clean and extractions…

We go to see the doctor [a different doctor now as the other had retired] and ask his advice as I was concerned about the blood thinning meds I was on. He just said flat ‘NO’ you can’t go to the dentist ‘impossible’. We even took paperwork the dentist gave us and he didn’t want to know.

A week later we go back and see the stand in doctor again [the guy who made the appointments] , he tells me not to take a certain pill for that day and it will be fine. job sorted.

August saw me standing up and walking out of the doctors leaving my better half to try and get a point across to the new doctor – it was about pills and dizziness but boy did this doctor not want to listen – at all.

My patience ran out .

The appointment for hematology was here so off we went to Baza hospital, it began when the front desk told us to go to the wrong floor but eventually we found the department. Two guys sitting in a small office looked at us and asked if that was all the paperwork we had…

Now if you’ve lived in Spain as long as we have you’ll know that moment when something is about to be said that is going to leave you thinking [or saying] ‘Madre F**king Mia’, this was one such moment and here’s why:

have you been for your appointment at internal medicine? We said no because we were still waiting for the appointment…

We are still waiting for the physio appoinment not that it will do any good this far on now anyway but I can only assume it has gone the same way as the internal medicine appointment did. Situations like this are far from ideal when you have to keep your blood pressure down.

You may be thinking why we didn’t chase it up? Well we did and were told by our local doctor several times “there are lots of people, do you understand?” plus in Spain anything like this usually takes forever anyway. Communication is clearly lacking somwhere down the line.

On Sept 27th we went back to the hospital to have blood taken, the appointment was at 8.08am exactly! We arrived early and the waiting line began to build behind us. After 10 minutes the doors opened, we handed over the essential paperwork and sat down ready to be seen. A couple of minutes and my number came up and the blood was taken swiftly – a very quick and efficient experience.

The nurse who was taking my blood was a big lad and I can distinctly remember his uniform being held together with plasters, two of them to be exact where the buttons had gone the journey, a wry smile and we were on our way again to the place where you make appointments.

The woman behind the desk was as miserable as sin, she passed us on to someone else who after lots of typing came back with some paperwork. The appointment for internal medicine had been made – this time for November, a full five months after I was supposed to have the first one. The lady mentioned that there had been a mix up with our local doctor…

12th of October and we recieve a whatsapp message stating that I have to go to Granada for an MRI scan. What?! The message was recieved on Wednesday evening and we had to be in Granada that weekend. We knew nothing about this scan and I was now having chickens in case they had found something in the blood test.

We replied several times and told whoever was sending these messages that we had no idea what was going on and that we had no clue why I had to have another MRI. 24 hours later and the phone rings, this time someone tells us that the MRI appointment had been made back in April when I went into hospital, it was not obligatory, just a 6 month scan that they do.

Communication was not good in this instance and it had me worried. At no point were we told that I’d be coming back in 6 months for another MRI, if I had been then that would have been fine but coming out of the blue like that was not ideal. I decided to get the results back from the blood test first – 3 days after when the scan would have been. One thing at a time…

18th of October and we receive a telephone call from the blood guy – all was normal which was a relief. The fact that the hospital rang us was good as we were initially told that we would have to ring them on the 20th so not only were the results early it also meant we didn’t have to call. Good stuff.

Final visit to the hospital for 2022 and it was a 40 minute wait at internal medicine, which isn’t too bad. I spent 30 minutes in the room where blood pressure was taken, they took a listen at my heart and I got weighed. There was more time spent on paperwork than there was on me..!

It was however quick in the grand scheme of things, the staff were friendly and the next appointment isn’t for another eight months so that’s me chilling until well into next year. My only wonder is why this could not have been done at the local doctors but that’s just the way it is.

So is the health service good in rural Spain? In all honesty it’s a bit of a mixed bag, I am very grateful for the care I received in Granada which had many positive points as I mentioned earlier in this post. Staying in hospital in Spain is very different to that of the NHS – very different.

The appointment for physio appears to be eternally lost in the 5th dimension.

After being discharged the whole thing basically went downhill at a rapid rate of knots, my local doctor is argumentative, rude and not interested, the local hospital made a real dogs breakfast of the appointments, communication is lacking and there is of course the obligatory mountain of paperwork. The appointment for physio appears to be eternally lost in the 5th dimension.

All in all I have to appreciate that I am pretty much near 100% fitness after the stroke and the Spanish health system sorted me out so that I could get myself there. There have been some issues for sure but that’s the way it is.

What advice would I give? – Be proactive, if you believe that something is taking longer than it should be then ask and ask again, don’t settle for ‘there are lots of people waiting’ because in my case the hospital messed up.

Be prepared for things to go slowly, you will have to wait at some stage but if you’re from the UK you may also be pleasantly surprised how quickly things happen especially when it comes to emergency.

Be prepared for the health service to be different especially with hospital stays, the culture is different so expect late nights, loud talking etc – basically the opposite of a UK hospital.

Do expect standards to drop dramatically when you return home to a rural area, the further away from the cities you are the more noticable this will be.

Overall, the Spanish health service while you are on a ward in a bed is good, it’s different but the actual care you receive is top notch, it’s what happens later after you’ve been discharged that really lets the team down.

Our local doctor is a rude and challenging individual [putting it politely] and there is usually no consistency between local nurses either depending on who is working on any given day, as such I am registering elsewhere. It’s my health so I’m not taking any chances or working on assumptions because the right info isn’t forthcoming or because someone can’t be bothered to do their job properly.

To be honest it’s hard work being ill in rural Spain, you have the challenges of getting better and sometimes it feels like you are battling the system to get the right info, appointments and sometimes just general advice.

Note: This article details my own experience based on using the health service since 2004 and more recently following a health scare – your experience may be very different and of course every situation is different. On this blog I/we like to be transparent and tell it how it is, you will often hear from expats how brilliant the health service is – this however is not always the case for every individual.