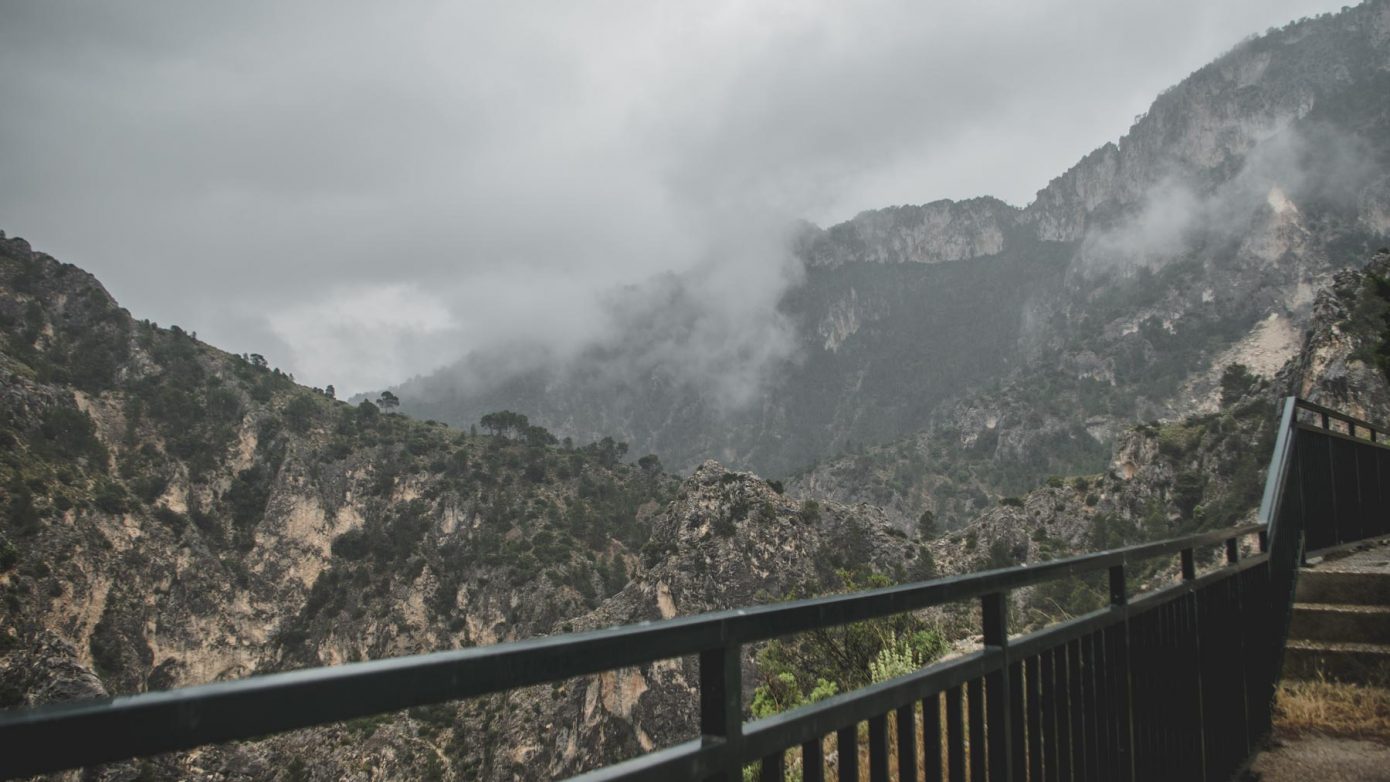 The best part of Embalse de Valdeinfierno is the drive there, we’d planned the visit the week before then after a quick weather check 24 hours earlier we discovered it was going to rain – all day.

The Shogun had not yet been through its paces in the Spanish mud and this would be one of our last day trips out without a new set of all terrain boots. As the day progressed so did the rain. There are two ways to get to Embalse de Valdeinfierno, one is the main road and the other which skirts around the Sierra de María-Los Vélez Natural Park. To go this way you don’t enter the natural park but drive straight past the signed entry road and head off into the ‘campo’.

The terrain is changeable with some stunning scenery, passing cortijos along the way and eventually driving through a farm you really are off the beaten track. Eventually after about 40 minutes the track leads you into the woodland, this is where things get interesting as the track is one vehicle only – you do not want to meet anything coming the other way although this is unlikely.

There are no barriers and the drop is steep, rock falls although small are frequent so it’s worth paying attention to those that have happened and those that are about to [especially in the rain], a pine had also fallen across the track which fortunately had already been chain-sawed, good as there is little room or opportunity for a three point turn.

This part of the trail is probably about a mile long then you come across a road which is blocked off and have to take a detour around it.

Passing a couple of old derelict houses and you are met with an opportunity to carry on or, hang a left and take a look around the old quarry, this one is big, far larger than any quarry we have been to before and is on several different levels, in the wet the track is short, steep and a challenge but once at the top it levels off and you can park your rig.

The blocks that have been cut are half the size of a 4×4 and they are scattered around providing a great photo opportunity if you are looking for a different backdrop, something unusual and large scale. [we will be back specifically for a photo shoot]

As always it’s more about the journey and not the destination and this short trip is a classic case of that, just as well as there is not much to see at the reservoir itself. It is worth a stop off though, there are a few places to explore on foot from the dam wall but the there is no swimming etc in the water, it looks quite marshy from above and to be fair we did not stay long given that by this time it was tipping it down with rain.

Would we visit again? Yes, we’d do the route again for a full day out trip, you’ll take your chances wild camping as it is strictly forbidden in the natural park although the area is so vast you are unlikely to be discovered if you find a hidden spot.

The drive is a good one, the other side of the reservoir is much more tourist orientated, much like a forest drive with recreation areas etc. There are further spots on this side where quarrying is still carried out and the thing to watch out for is that the signage is poor at best, there are several examples of arriving at a fork in the road with no signs so it’s pot luck which is half the fun unless you’re trying to get home.