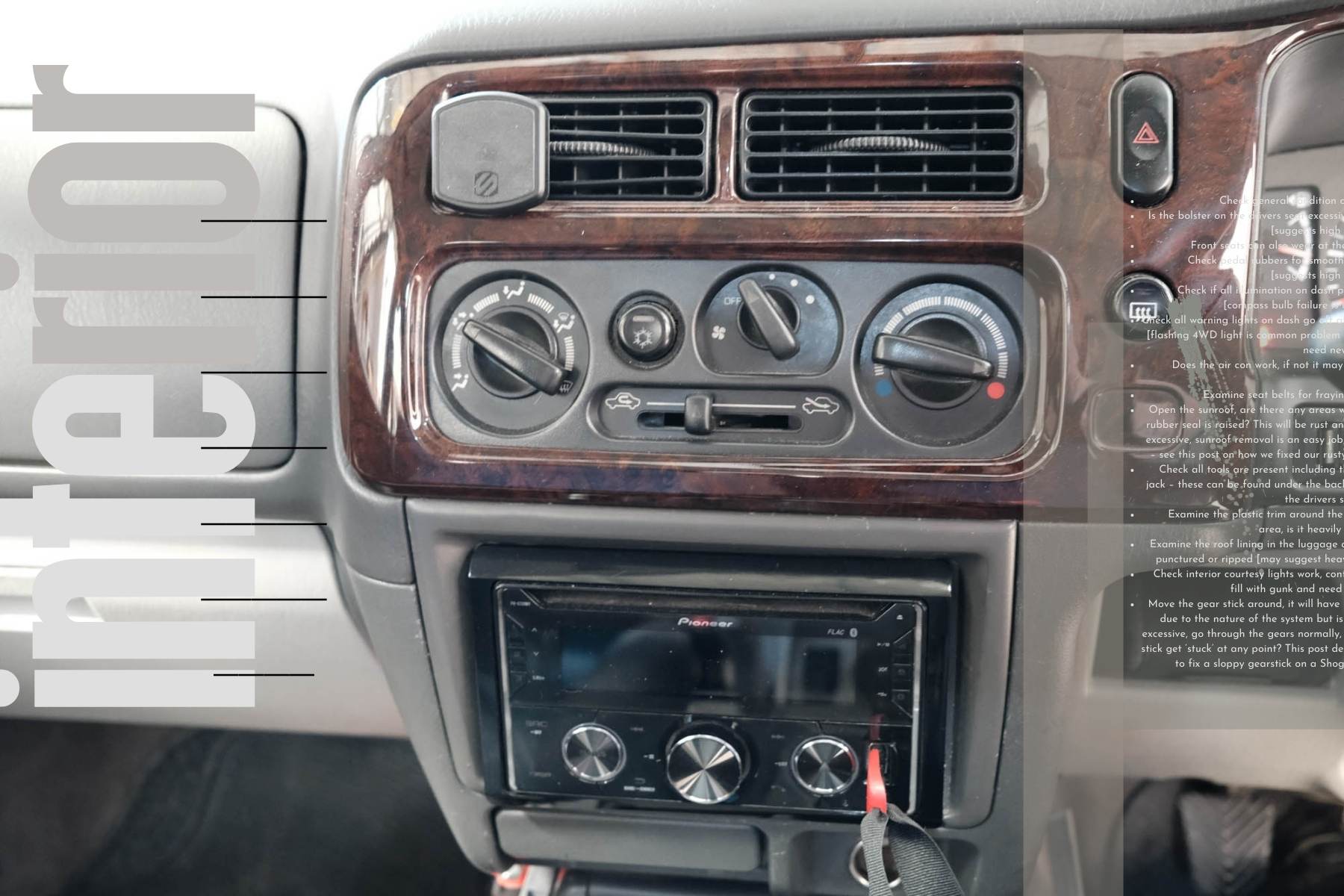 The Mitsubishi Shogun Sport 2.5 interior tends to come under critisism when you read online reviews, many of the comments refer to the interior being ‘bland’, ‘sparse’ or ‘basic’ and while this may be true to a certain extent it should not be a deal breaker if you are considering purchasing a first generation Shogun/Montero 2.5.

If you want all the bells and whistles then go for the normal Shogun, these 4×4’s of the same era cross the late 1990s into the 2000’s where you had both the second and third generation models – both were more equipped than their slightly smaller ‘Sport’ brother with the latter 3rd gen being significantly more modern and luxurious, both spanned the lifetime of the L200 based first generation Shogun Sport 2.5.

Mitsubishi had kept the Shogun Sport simple from the chassis up and that included the interior of the vehicle too, the name ‘Sport’ presumably coming from the slightly lower profile compared to it’s bigger brother as there is certainly not much else to warrant the sport badge, least not performance from the old 2.5 diesel engine.

There is very little difference between the top end leather clad interior of the later models and the basic cloth trim of the base model ‘Classic’ with it’s modest fabric and velour seats.

Essentially you have leather or cloth, later model ‘Warrior’, ‘Animal’ and ‘Trojan’ spec Shoguns had the black leather trim and the 3.0 V6 ‘Elegance’ also had leather but in cream [black optional] with more plush seats. Models like the ‘Classic’ and ‘Equippe’ had several cloth trim options with the most frequent being grey/blue and grey/black patterned.

Identical in almost every way the dash came with two options in faux walnut and a matte chrome design, later models also had a digital display and top of the range Shoguns could also have white dials – just to add a bit more of that ‘sport’ feel to proceedings. Also on later higher spec models an additional button could be found on the drivers door control panel – this was for the electric mirrors.

It’s not often you get vehicles with air con and a sunroof but many Mitsubishi’s of that era did, if you had a sunroof then your roof mounted center console housed reading lights and a digital display clock, without a sunroof and you got a full length roof console with flip down storage compartments for sunglasses and suchlike.

One area of the Shogun Sport that we have found immensely handy are the storage compartments in the boot floor. Not every Shogun Sport has these, one complaint is that when the rear seats are folded forwards to increase the load area they stand proud of the rest of the boot floor thus making it ‘stepped’ and not flat – this is not the case if the Shogun has the storage compartments, when the back seats are folded the floor becomes perfectly level.

“The interior of the first generation Shogun Sport was sparse but durable, no luxuries were to be found, what was present was functional and simplistic to compliment this capable old school 4×4“

The storage compartments are split, one lies directly behind the rear seats and the other [and most convenient] is at the rear of the car and also houses access to the mechanism to release the spare tyre which is underslung under the body.

Each compartment is around 8cm in depth so not a great deal of room but ideal for flat or foldable items such as molle pouches, tow straps, tools, cord, saw etc etc. The Shogun Sport 2.5 interior also has two storage compartments in each side of the rear boot space which are designed to hold first aid kits, fire extinguisher and tools, these compartments are very handy and the one on the right hand side is positioned adjacent to the 12v cigar lighter.

Mitsubishi were clearly taking the minimalist approach with the Shogun Sport 2.5 interior, afterall, ‘sport’ models do tend to be less refined. Assuming that you don’t have the floor storage mentioned above then you’ll need to be a bit creative with storage solutions in your Shogun – Here are some storage ideas & hacks.

The one thing that you do get with a first generation Mitsubishi Shogun Sport is a 4×4 that’s not pretending to be something it isn’t, it’s a more than capable vehicle off road for its age and gets the job done and then some. For interior gimmicks, full on electrics, comfort and refinement look elsewhere.

We love our Shogun, the first gen had character that can only be found coming out of the late 1990’s, a more modern step up in interior design and looks compared to it’s second generation ‘Pajero’ brother commonly imported into the UK back in the day. The Sport however maintains simplicity, as I’ve said before on this blog, simple works and with the Shogun Sport there is little in the way of electrical gizmo’s that can go wrong, in fact the most you get is electric windows which, in reality is probably all you need.

Do you own a first generation Shogun/Montero/Pajero or do you have the slightly older ‘Challenger’ [UK]? Do you agree that the interior is sparse or like us do you like the simplicity of it all? Leave youur comments below and check ous out via the links above for for more Shogun Sport related bits and pieces.