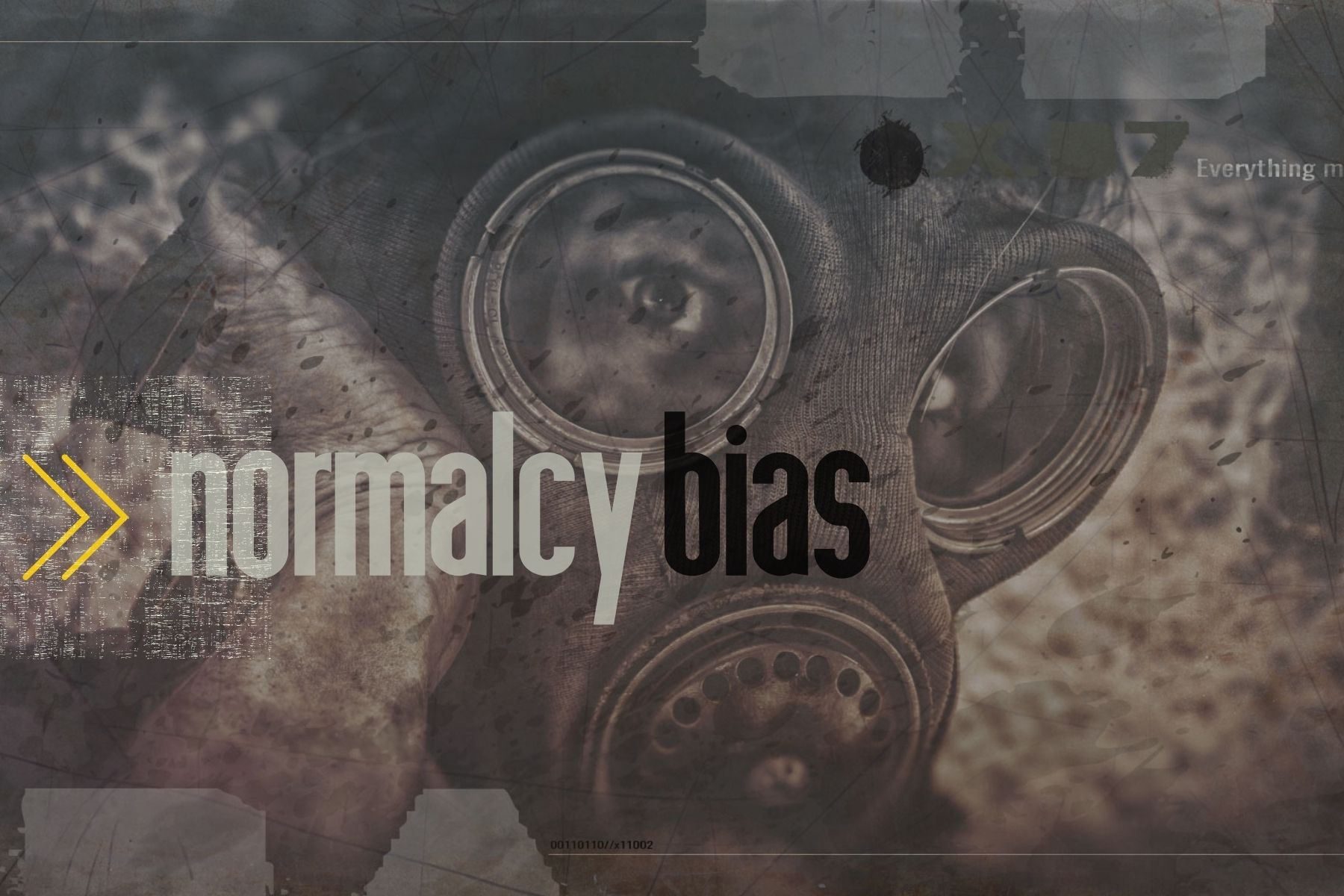 Around 70% of people will display normalcy bias either before or during a disaster or catastrophic event. That is bad news so what exactly is it?

Normalcy bias is when a person or people demonstrate a belief that all will be well even though there will will be a number of factors pointing to the opposite. As a result of this line of thinking people will usually severely underestimate the clear consequences of any given disasterous event.

Most potential threats of today can be categorized into the following:

If disaster strikes some people will be more prepared than others, we live in an ever changing world and if 2022 is anything to go by the dangers can become plain realities in a matter of days, ie: Russia’s invasion of Ukrain

Around 70% of people will display normalcy bias either before or during a disaster or catastrophic event.

Normalcy bias could also been seen during the Covid 19 pandemic, some refused to believe it even existed at all but in general a point in time came when many people became more relaxed about the dangers, mask wearing and social distancing became less important to some – ‘it won’t happen to me’ attitude began to creep in.

There are so many people out there unprepared for disaster it’s frightenting, talk about the whole prepping thing and some people just don’t get it [or don’t want to…] My own relatives are a prime example, relying on society and government that will ‘make everything okay’ in the event something happens.

There are far too many people on the planet for governments to ‘sort out’ a major disaster without significant adverse affects. Looking at the situation as a result of the Russian invasion of Ukrain we have the threat of a nuclear exchange – something which has been unthinkable and never this close since 1962 and the Cuban missile crisis. In addition to that the world has North Korea to watch closely, testing it’s biggest ever ICBM just as the casualties rise again and Putin ramps up the rhetoric around ‘nuclear’. Then there is China, a continuing pandemic [with cases on the rise again], financial and economic fragility and the big one, which if we don’t create a disaster this decade for ourselves climate change no doubt will.

All of the above is what you hear about on the news every day, as humans we are influenced by numerous things and the media knows exactly what it’s doing – hence war propaganda, the thing with normalcy bias is that people will watch the news about Putin and the Ukrain and not recognise how close and potentially catastrophic the situation actually is/could be, they will have their supper, go to bed and go to work the next day not even the sligtest bit concerned – it always happens to someone else or another country right?

Combat the Bias [Before SHTF]

Recognise the uncertainties in the world: There are so many uncertainties in the modern world that trying to rationalise them all in a ‘what if’ train of thought would make your head spin. Instead, acknowledge what is happening now and prioritise what may be the most likely.

Make Plans: So what would you actually do if the warning sirens started when you were at work? Do you have a plan of action? A route to take to avoid the masses, how long would that route take to get you back to your family and if it was blocked what would be your ‘B’ route? This is just an example of one aspect in which to prepare, another might be do you have a meeting place in the event of disaster? A very simple thing to have all family members aware of.

Prepping: Stocking up on food, most people only have enough for 3 days then what? A collapse of society, and unrest are situations you need to be prepare for, there have been examples of this in recent history, pair up hyperinflation with food shortages and people begin to go hungry – hunger changes people, you don’t what to be one of them or being confronted by one of them.

When a disaster begins to unfold everyone becomes a last minute prepper, all those who just ‘didn’t get it’ suddenly become aware that they need to stock up, by this time the normalcy bias has done it’s work because it is too late, you are competing with the masses and putting yourself into potentially dangerous situations.

Don’t ignore the obvious: If those around you are beginning to stock up then it may be an idea to pinpoint those items you are going to need first [think toilet role during the Covid pandemic]. Look at *fuel prices, while fuel prices can be a bit like investing in the stock market if they are continually rising then stock up on extra fuel before price becomes an issue. *See rising fuel prices in this post

Be aware & react quickly: In a SHTF situation it pays be aware and think ahead, play the movie forward and think clearly about the present and potential short term future outcomes, be rational and above all, be safe.

Previous Post
What do rising fuel prices mean for overlanding?
Next Post
Can I Have an Open Fire Camping in Spain?
Close
Close