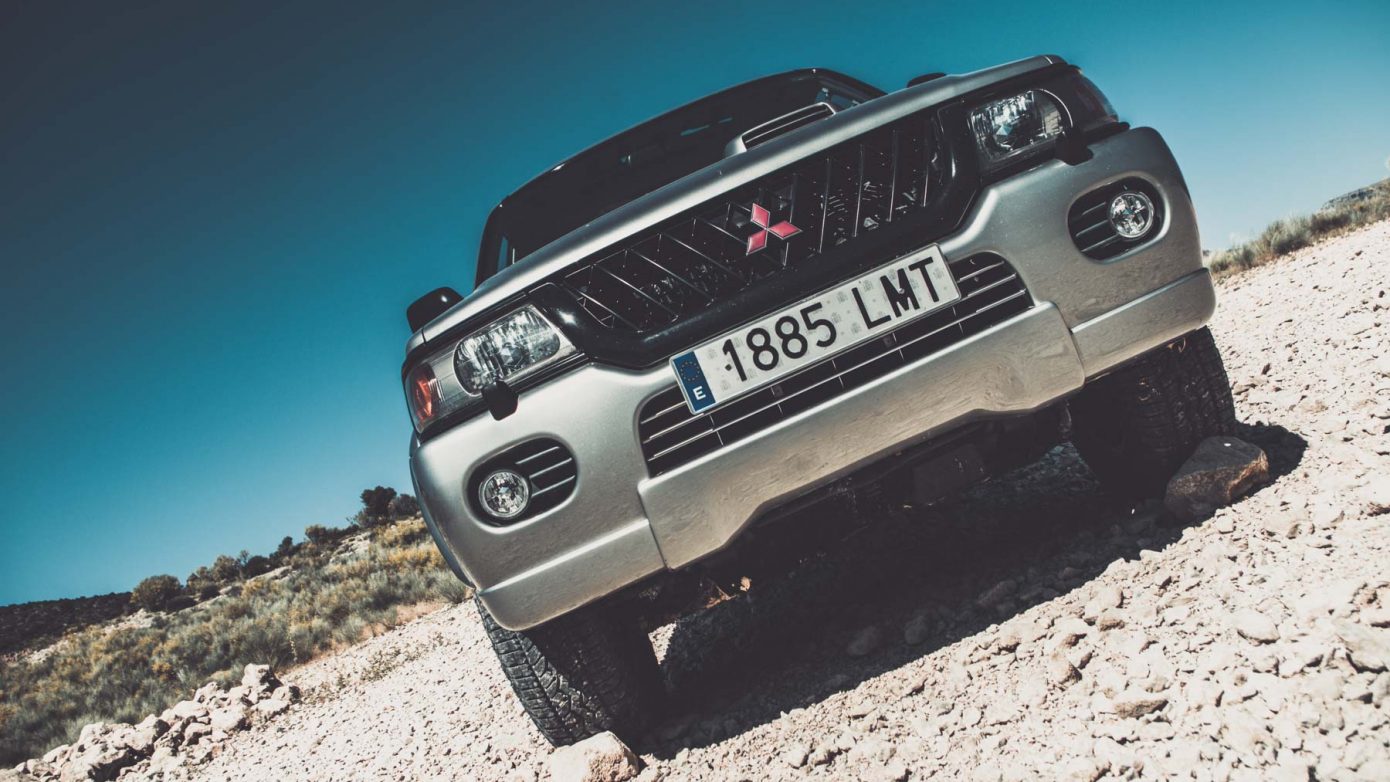 If you are planning on overlanding Spain or more specifically the Andalucia/Granada region then we have some tips on what to expect when you get here. Our own overlanding is predominantly done in southern Spain where we have been living since 2004. Out in the ‘campo’ [countryside] we’ve seen it all both through living rurally and overlanding the terrain, here are our top 10 things to expect if this is your first time overlanding Spain.

Especially during the hotter, summer months there is a tremendous amount of dust in Southern Spain, out in the campo there are numerous tracks and if you’re driving through through agricultural land like olive/almond groves the dust is very fine.

Be prepared to use that rear wiper and also to get dust everywhere, keeping the windows closed [if you have air con] is also a good idea.

Some trails are high, winding dirt track, switchbacks up mountains and narrow in places – you don’t want to meet anything coming the other way although to be fair we never have [yet]. Get to the top at 6000 feet and the views are breathtaking, this is one of the aspects we love about overlanding Spain. At these kinds of altitudes you can be completely on your own, cook and sit back to enjoy the location. The trails are not that much of a challenge but as mentioned, narrow with big drops, some evidence of rock slides can be seen and best tackled in the dry.

Overlanding Spain will no doubt see you driving past farms, in Andalucia almost every farm has a dog/or dogs all of which enjoy making their presence known, it’s pretty much guaranteed that these dogs will chase your vehicle for a few hundred yards too – they’re just having a chat and the majority are fine [just doing their job]. Don’t be put off by the Spanish Mastiff, although an enormous beast the bark is worse than the bite…. as they say.

In the height of the Andalucian summer [July/August] the temperatures can reach into the mid 40’s [104f]. This is something to prepare for not just for yourself but for your vehicle. On cloudless days the sun is tremendously strong and can burn in a very short space of time, it’s easy to get caught out.

Air con is going to be your friend during a trip, as is chilled water, the temperature can climb into the thirties by late morning and it’s not until dusk that things really begin to get comfortable again.

The terrain in Andalucia is pretty rocky, while there are areas that you can pitch a ground tent, being up top in an RTT will offer more varied locations in which to wild camp. The rocky landscape can be spectacular as well as challenging in places, the terrain is rugged so if you’re into hiking most trails at altitude will be moderate – difficult.

The rocky terrain is also home to a variety of critters and snakes which can also be found in woodland, keep an eye out for scorpions which can be found under rocks and also centipedes.

There are numerous ‘natural parks’ in southern Spain, all of which are a scenic drive through, the best times to go are off season on a weekday, some roads are narrow so it’s good to have the place relatively to yourself. There are mapped routes through the parks although if you use the likes of GAIA gps try experimenting on some more challenging trails.

Natural parks have their rules and there are plenty of them – no wild camping being one of them however there are camp sites at most parks none of which we have tried [at the time of writing] the reason for this is that reviews are mixed/below average, just a heads up, although obviously there will be some good ones out there too.

If you like being on your own or taking a party to remote areas then Andalucia will not disappoint, out in the campo and in the hills can be exceptionally quiet, the kinds of places you could camp for a week and not see anyone at all. In the searing heat of the Andalucian sun you can step out of your rig and almost ‘hear’ the silence.

We touched on views above bit they are worth a mention on their own, getting high up especially if you are near a reservoir or lake offers views like nothing else, couple this with quiet and being back to nature and you can find settings that simply begs for the camera. Besides from daytime you can also witness the night sky with little to no light pollution which makes a big difference.

Barro – Andalucian mud, until you experience it you won’t quite appreciate the consistency of this stuff! If you experience a storm or any kind of substantial rain while overlanding Spain you will encounter mud, it sticks to everything and it’s like clay, I remember having to take the dog out and coming back three inches taller before the neighbours told us to wear plastic bags on our feet.

Another problem with barro is that when the storm has passed and the sun comes out again it gets hard baked so anything under your rig will solidify, your wheel balance may be knocked out which is something we recently experienced – cleaning the inside of the rims sorted this so be prepared to get the pressure washer under part of the chassis.

Spain offers a wide variety of variation both in landscape and culture, overlanding in Andalucia can see you climbing up a mountain pass one minute then navigating almond groves the next before hitting tarmac a minute later. The landscape is mountainous, dotted with pines and rock formations, some areas almost look like a scene from the land that time forgot.

Bodies of water tend to be limited to reservoirs inland, the weather is variable and extremes of temperature can be high into the forties or minus eighteen in the winter months. The time of year will also affect your overland experience, September is a nice month in Andalucia, not too hot but still hot enough! Late spring is also good time, one thing is for sure and that is Andalucia will not disappoint when it comes to an overland trip.