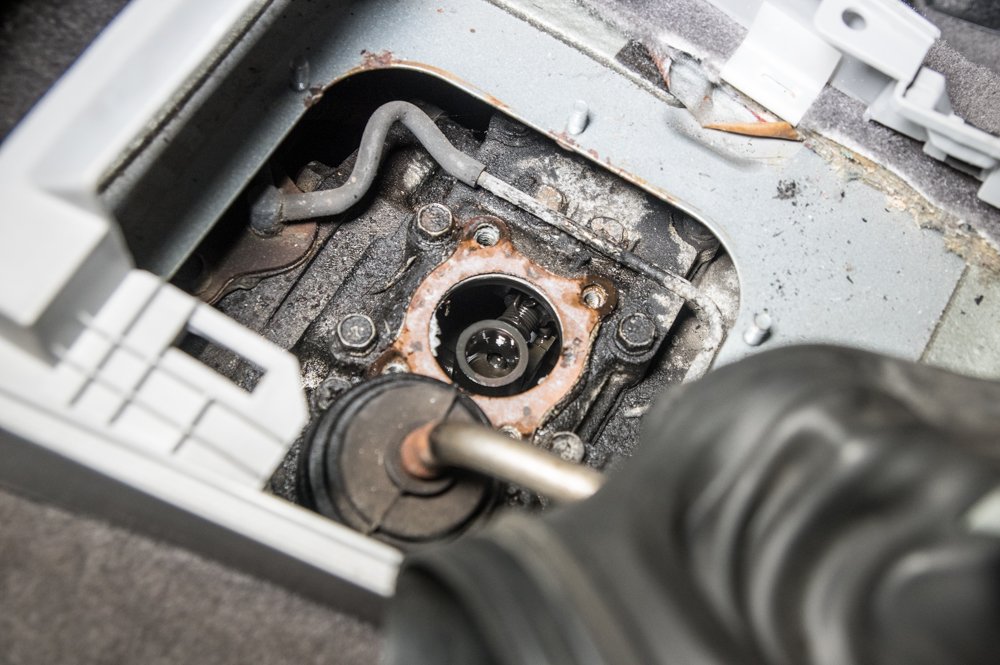 After 20 years of whatever abuse our Shogun had endured one immediately noticeable effect was a sloppy or loose gearstick, something to be expected on a 4×4 of this age but irritating non the less. engaging from third to fourth gear was becoming an issue so it was time to check out a fix and keep fingers crossed it wasn’t going to be expensive.

One culprit of a sloppy gearstick on a Shogun Sport is the gear stick bush which is located right at the bottom of the stick itself, a small plastic bush easy to replace but not quite as easy to get to.

First up, the entire center console needs to be removed for access and room to work, you have to also negotiate two gear stick gaiters as well as a rubber dust cover which you may need to cut slightly and cable tie up later.

Once the console is removed the next step is to remove the retaining plate which holds in the place the black rubber dust cover, there are a couple of screws which are quite awkward to reach but once removed the dust cover needs to come off.

There is no way on the planet that this cover will pull over the main gear stick so we cut ours slightly at the neck to allow removal.

MAKE SURE YOU ARE IN NEUTRAL

Once the above has been removed you now have access to the top of the gear box. There are four plates and gaskets around the base of the gear stick – looses the bolts and retain them order as some are longer than others.

The plate that the bottom may need some persuasion to be removed, once it is you can now remove the gearstick exposing the bush at the bottom.

Reassembling is the reverse of the above however you may need some gasket sealer to keep everything sealed and good. If you did need to cut your rubber dust cover once you have it back in place remember to seal around the cut [or just underneath it] with a cable tie.

Put your center console back together and go for a drive.

Does Changing the Bush Make a Difference?

Yes, although it’s hardly a new gear box, big long gear sticks on older 4×4’s have their characteristics and tend to have a lot or movement anyway however the sticking point between third and fourth gear was remedied. The old bush actually looked ok, we were half expecting it to be split or cracked to pieces but it looked fine. For a sloppy gear stick on your Shogun Sport it’s worth doing as you can pick up a new bush for under a tenner and work time is about an hour.

Have you swapped out your gear stick bush and did it make a difference? Let us know in the comments below.